News reports on irregular migration have swelled in Canada’s ethnic media over the summer, following a trend that began with the inauguration of Donald Trump and fears about his plans for immigrants, undocumented ‘aliens’, and those stuck somewhere in between.

As of January 2017, the US was providing Temporary Protected Status to over 300,000 foreign nationals from a total of 13 countries: El Salvador, Guinea, Haiti, Honduras, Liberia, Nepal, Sierra Leone, Somalia, Sudan, South Sudan, Syria and Yemen. The status is given based on dangerous conditions in the home country, and is extended for six or 18 months at a time by the Secretary of Homeland Security and the Secretary of State.

When Haiti’s TPS protection was extended only six months in advance, moving the expiration date to January 22, 2018, fear broke out among Haitians who felt they could not safely return to their home country. Uncertainty over the TPS and rumours circulating in the US that Canada would accept Haitians with open arms, meant Canada saw the highest number of asylum seekers in years—5,712—cross the Canada-United Stated border in August. Canada’s ethnic media was part of the conversation.

Even as news began to spread in Canada that those high numbers were going down, concerns continued to rise around TPS ending for Latin American countries like El Salvador and Honduras. There are 260,000 Salvadorans and 80,000 Hondurans who would be at risk of deportation, and as a result are looking to Canada. Reports from ethnic media in the US touted Canada as a safe haven, and Canadian politicians scrambled once again to shut down rumours. Around the same time, Attorney General Jeff Sessions announced that the Trump administration would end the Deferred Action for Childhood Arrivals program (DACA) in six months.

Since June 15, 2012, DACA has given hundreds of thousands of immigrant teenagers and young adults the chance to live in the US without the constant fear of deportation. It allowed them to get jobs, build careers, get a driver’s licence and settle into life in the US. Also known as DREAMers, after the DREAM Act, which has been working its way through congress since 2001, hoping to allow unauthorized immigrants who grew up in the US to stay legally, and eventually get citizenship. More than 780,000 people have taken advantage of DACA, and are now at risk of losing what they have gained.

Where chaos and confusion drove discussion in the US, people looked north for possible refuge—returning to where they came from for most was out of the question.  Canada’s ethnic media was paying attention: During the weeks of August 30 to September 14, concerns that DACA and TPS policies could prompt a massive new wave of immigrants was the most talked about issue in Canada’s ethnic media’s immigration stories.

MIREMS – Multilingual International Research and Ethnic Media Services – has been closely tracking reporting on the outcome of the 2021 federal election in the ethnic media. We found that many outlets followed the lead of the mainstream media in covering press conferences and speeches which they translated and interpreted in their respective languages.

The outlets added coverage of interest for their readership on candidates from their respective ethnic and linguistic groups, while also featuring community responses and providing analysis on the impact of homeland-related policy issues on the voting patterns in specific communities.

Ethnic media initially responded to the election outcome by reporting the results at the federal level and in local ridings. There was a wide-spread sense that the election was a waste of money because it had not led to any change. Some sources like the Russian website NewsRu.ca worry that another costly election may be looming in 18 months. Ottawa-based Chinese website CFC News, however, expects that the Conservatives and NDP, who repeatedly attacked Justin Trudeau for holding the election, would likely not overthrow the government in the near future.

OMNI Filipino TV featured interviews with democracy experts who pointed out that many countries like France and Germany have stable minority governments, and this allows the smaller parties to exert more influence. A column in Toronto’s Spanish paper El Popular argued that a majority government is essentially a dictatorship, while a minority government has to negotiate policies. The question is whether the prime minister has the temperament to engage successfully in the necessary negotiations. Vancouver-based Chinese website Van People pointed out that the positivity the Liberals exhibited in 2015 had vanished and the Liberals kept attacking their opponents during the 2021 campaign, continuously telling voters how terrible it would be if the Conservatives came to power.

On the second and third day, the coverage widened to include more detail on the outcomes in local ridings with a high representation of the respective ethnic group and candidates from the ethnic group that had won the election. Filipino media ran several features on newly elected MP Rechie Valdez, the first female Filipina MP. She was perceived as representing not only her riding but all Filipinos in Canada. Punjabi media reviewed the results in the Brampton ridings and Surrey. Toronto’s Hamdard Weekly newspaper reported that 18 candidates of Indian origin, including 16 Punjabi candidates, won the election. WTOR 770 AM Asian Awaz Punjabi radio featured MP Iqwinder Gaheer.

OMNI Italian TV focused on areas with a high Italo-Canadian population like York and Vaughan, and on Italo-Canadian candidates like Francesco Sorbara, Marco Mendicino and Frank Caputo. The Portuguese papers featured Portuguese-Canadian MPs Peter Fonseca and Alexandra Mendes. OMNI also ran a feature on Indigenous representation later in the week, noting that more Indigenous representation is needed in Parliament to get Indigenous issues like clean water and housing on reserves addressed and to settle outstanding land claims.

Van People reported that fewer Chinese candidates ran in this election, but nine Chinese MPs were still elected. They also observed that voter turnout is usually low in ridings with a high proportion of Chinese residents and ran articles on initiatives that had promoted voting among Chinese residents.

Van People noted on Sept. 22 that Chinese ‘netizens’ believe the Chinese will be better off with the Liberals in power. They consider that the Conservatives have always been less friendly to China than the Liberals and pointed to Erin O’Toole’s “anti-China remarks” on blocking Huawei and banning WeChat. They concluded, “Judging from the large number of incidents of Asian discrimination caused by the constant ‘anti-China’ remarks made by former US President Trump during his administration, if politicians are anti-China, incidents of people discriminating against Asians are more likely to occur.”

Several Chinese outlets picked up on the news that Conservative candidate Kenny Chiu complained to the National Post that his defeat was related to the Conservatives’ anti-China policies. Chiu had received attacks in the Chinese media and social media during the campaign. He believes that his bill to establish a Foreign Influence Registry and call for sanctions against Chinese officials made him a target of the Chinese authorities and pro-Beijing forces in Canada.

Van People and Dawa Business News, another Vancouver-based Chinese website, pointed out that Chiu was not elected in a riding with a high population of immigrants from Hong Kong, which shows that he does not speak on behalf of people from Hong Kong. O’Toole’s anti-Chinese rhetoric had Canadians of Chinese origin campaign for the Liberals and vote against the Conservatives despite their usual indifference to Canadian politics. The Chinese paper Vision Times, however, quoted Civic Education Society Canada President Dong Dacheng reporting that Kenny Chiu and NDP Candidate Jenny Kwan were attacked with fake news because of their criticism of China’s human rights record.
Radio host Harjinder Thind also pointed out on Red FM 93.1 Punjabi in Vancouver that minority communities are not able to trust the Conservatives and that Erin O’Toole did not spend enough time with these communities to build any kind of relationship. In fact, CHTO AM 1690 Hulchul Radio host Sandip Bhatti mentioned that sweets are being distributed in India because the Liberals won in Canada. This is likely due to their perceived immigration-friendly stance.

The ethnic media have played an important role in translating the election outcomes for their local audiences and reflecting community-specific developments around candidates originating in the community or running in neighbourhoods with high concentrations of residents from the community. They have also picked up on dynamics and issue areas particular to some of the ethnic and linguistic groups.
CLICK HERE TO GET OUR EXCLUSIVE WHITE PAPER ON
COVID-19 - LESSONS FROM THE ETHNIC MEDIA IN 2020
FOR AN INCLUSIVE RECOVERY!
​

Your expert on multilingual and ethnic media in Canada and around the world.

​﻿​Across borders and language barriers, we connect companies, organizations and opinion makers with diverse ethnic communities in Canada and worldwide. We monitor, analyze, summarize and translate stories from over 1,000 print, online, TV and ﻿radio sources in over 30 different languages to provide you with the most current news and opinions from a whole range of ethnic groups. ﻿﻿﻿
​
The mainstream media only reflects the views and concerns of Canada's diverse population in part. Important opinions and valuable insights of numerous ethnic communities are often found in their community's media, and expressed in their native languages. Our 30 years of experience monitoring stories from multilingual media have resulted in valuable market intelligence about consumer trends and communication strategies and have led to a better understanding of diverse ethnic audiences and the media serving them.
​
Want to know how your topic of interest resonates with multiple ethnic communities?
​Let us be your eyes and ears in the world of multilingual media.
​ 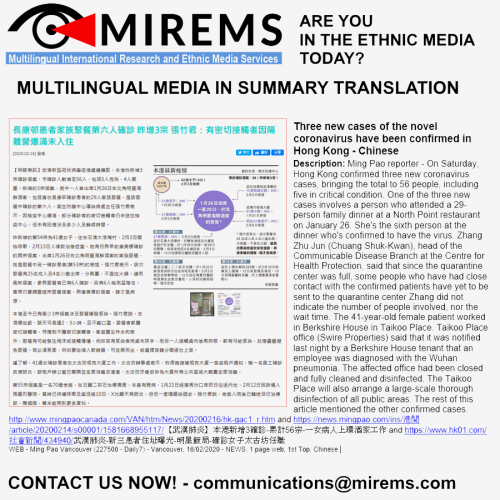 Are you in the ethnic media?
Would you like to find out?
​
Below is our daily feed of stories from ethnic media sources across Canada.